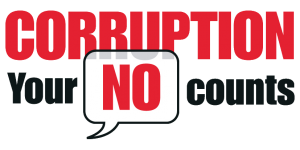 It is popular saying that Nigeria is the ‘Giant of Africa’; it’s a country blessed with so much mineral resources to the admiration of other countries in Africa and even foreign countries.  Some foreign countries who have in-depth awareness of the resources bestowed in Nigeria has stated that “Nigeria has no business being poor”.  Sadly though, statistics show that Nigeria is the poverty capital of the world as it has been reported that 86.9 million Nigerians now living in extreme poverty represents nearly 50% of its estimated 180 million population. Nigeria is currently the world’s poorest country. It is ironical that people starve in the midst of plenty. There is definitely a reason for this sad outcome; the reason is not far-fetched neither do we need a soothsayer to identify the problem of the country which has led to its deplorable economic state. The problem is CORRUPTION.

The word corruption can be defined as dishonest or fraudulent conduct by those in power, typically involving bribery.  Corruption is seen at all levels of the Nigerian society. Corruption is prevalent from the political leaders,religious leaders, law enforcement agencies, respected business mogul, civil servants to the common man on the street.

A Critical look at the political leaders in Nigeria, it is easy to see that they lack the interest of the populace as they continuously mismanage government funds meant for the general public. These  political leaders starch away  millions of funds in foreign currencies in foreign accounts, storing trillions of money in their houses in storage tanks and soakaways. Suffice to say that, these stolen funds if shared amongst the Nigerian populace, an individual would get nothing less than millions of Naira. The thought of the number of political leaders we have in the country and the imagination on how many millions of funds are squandered unscrupulously to the expense of the common man is unfathomable.

Corruption has led to various ills in the Nigerian society leading many to feel that it is best to be corrupt to achieve wealth and fame. Corruption has eaten deep into the Nigerian system so much so that to secure political appointment, employment, contracts and even in the normal procedures to be followed at government parastatal, or achieve a particular requirement as stipulated by law is all shrouded with corruption. The maxim’ scratch my back and I will scratch  yours’ plays out in all aspect of the Nigerian sector. Sad to say that, anyone who opts to follow due procedure  is seen as an unexposed individual and it would take a much longer period to complete such process if ever such is completed. Corruption can be  termed the short cut to success. Additionally, it seems one can achieve little or no success in any endeavor in Nigeria without having to be given a bribe or the taking of bribe.

It is appaulling that when these corrupt individuals are  caught, with all tangible evidences to prove their corrupt acts, the full weight of the law is not put into action. Often times, these cases are swept under the rug and little is heard of such cases afterward.

This situation calls to question the efficacy of the anti corruption laws in Nigeria.The law is clear on procedures to be followed in instances of corrupt practices. But yet, another question is how effective is the enforcement of these laws if such laws are been enforced efficiently. These questions are pertinent as corrupt practices seem to be on the increase irrespective of the numerous cases being handled in court.  The governing laws on corruption in Nigeria are the 1999 constitution, the Economic and Financial Crimes Commission Act, Independent Corrupt Practices and Other Related Offences Commission (ICPC), Criminal Code, Money Laundry (prohibition)Act.

For instance, Section 98 of the Criminal Code deals with the offence of corruption by defining what it is and prescribing an offence for corruption and its related offences. It covers extensively corrupt practices in its various forms in different sector of the Nigerian society.

Section 18 of the Economic and Financial Crimes Commission Act deals with offences related to financial crimes and its penalty. The penalty for such crimes is imprisonment of 2 years and not exceeding 3years.

Definitely, there is either a lapse in the enforcement of applicable laws to the crime of corrupt practices or we need a review of the subsisting laws or the making of additional laws to further serve as deterrent to the corrupt individuals.

It might not be possible to totally eradicate corruption in any society but there can be sure success in  its minimization to the barest minimum. Hence, I use this medium to profer few recommendations that can better achieve this desired purpose.

Corruption can be curbed in any society when the following factors are critically analyzed and enforced accordingly. They are as follows:

The use of capital punishment for offenders of corrupt practices will serve as a great deterrent to corrupt individuals. The use of this form of punishment will br e effective when the corrupt individuals are publicly executed as a show of shame and at the same time pass a message across to other offenders. This form of punishment has worked for some counties who choose to enforce its implementation strictly. The corrupt rate in such countries has greatly declined.

There should be courts created specifically to handle the cases of prosecution of corrupt individuals in order to achieve speedy delivery of justice and to curb time wasting and undue legislative delay. The  limit on the duration of court proceedings will ensure that judgment are delivered timeusly, particularly  when court proceedings in such matters are made to have a duration of 6months  or less. The use of these mechanism will act as a deterrent to offenders who might want to seek solace on the fact that court proceedings could normally take years to prosecute such matters.

The advantage of this mechanism is to faciliate the number of corrupt cases being prosecuted.

Another way to put a check on corruption is for the Nigerian government to put in place centres that open a window of opportunity to well meaning Nigerians who have valuable information on the corrupt activities of certain individuals to make detailed official reports which are verifiable. Individuals who come forward with such valid information should be adequately compensated financially.

These reports should be treated as strictly confidential to protect the life of the individual making such a report. The giving of financial compensation could make anyone who has valid and correct facts of corrupt crimes to contributed their quota in the advancement of the Nigerian economy.

Special bodies and organization should be created to orientate the Nigerian masses that corruption is not the short cut to happiness but a death trap. People should be educated on the advantage of having values and integrity. The information on the measures put in place by the government to curb the growth of corruption should be disseminated. This avenue should also serve the purpose of ensuring that people are sensitized that they are free to make a report of corrupt practices and have the full protection of the Nigerian government, thus, such ones do not have to join in such acts but be the weapon of change.