Ethics is derived from the Greek word “ethos” which refers to character, guiding beliefs, standards that permeate an organization, community or people. As a bailiwick, it is that branch of philosophy addressing the values relating to human conduct in terms of the rightness and wrongness of certain actions and the goodness and badness of the motives and outcomes of such actions (Velasquez, Andre, Thomas Shanks, & Meyer, 2017).

According to Warren, R. C, in his article “Are we making progress in international business ethics? Humanomics, 27(3), 212–224” (2011), Business ethics is a form of applied ethics that examines ethical principles and moral or ethical problems that arise in the business environment. It applies to all aspects of business conduct. It is relevant to the conduct of individuals and business organizations as a whole. It’s part of Applied Ethics, a field of ethics that deals with ethical questions in many areas such as medical, technical, legal and business. The range and quantity of business ethical issues reflect the degree to which business is perceived to be at odds with non-economic social values (Enderle & De George, 2014; Müller et al., 2014). Business ethics is both a normative and a descriptive discipline (Enderle & De George, 2014; Hayibor, 2017). As a corporate practice and a career specialization, the field is primarily normative. In academia, it takes an illustrative or descriptive approach.

Wayne Norman views Business ethics as a concise, but in many ways misleading, label for an interdisciplinary field covering a vast range of normative issues in the world of commerce. The label lends itself most directly to a core set of questions about how individuals in the business world ought to behave, or what principles they might appeal to in order to negotiate moral dilemmas at work. In the broadest sense, business ethics also inquires about the most appropriate or just designs for firms, markets, market regulations, and political oversight in a democratic society and a globalized economy.

Considering the normative and the descriptive approach to ethics, the category of descriptive ethics is the easiest to understand – it involves describing how people behave and what sorts of moral standards they claim to follow (Enderle & De George, 2014; Müller et al., 2014). Descriptive ethics incorporates research from the fields of anthropology, psychology, sociology, and history as part of the process of understanding what people do or have believed about moral norms (Alzola, 2015; Enderle, 2015; Müller et al., 2014).

The category of normative ethics involves creating or evaluating moral standards. Thus, it is an attempt to figure out what people should do or whether their current moral behavior is reasonable. Traditionally, most of the field of moral philosophy has involved normative ethics – many philosophers endeavor to explain what in their considered opinion people should do and why (Alzola, 2008). Any attempts to measure or quantify ethical standards are normative.

In virtue ethical practice, there are six core values (Moylan & Walker, 2012). These core values are;

In addition to these core ethical values or virtues, scholars have established six fundamental moral principles. The first moral principle is the Golden Rule which states that, “do unto others as you would like them to do unto you”.

The second ethical principle is the Immanuel Kant’s Categorical Imperative which posits that if an action is not right for everyone to take, it is not reasonable for anyone.

The third principle is Descartes’ Rule of Change which holds that if an action cannot repeatedly be taken, it is not right to be taken at all.

The fourth principle is the Utilitarian Principle that says to take the action that achieves the highest or greater value (Enderle & De George, 2014).

The fifth key ethical principle is the Risk Aversion Principle that states that ethical people should take the action that produces the least harm or the least potential cost.

The sixth and final principle is the principle of “no free lunch” rule that states that people should assume that virtually all tangible and intangible objects are owned by someone else unless there is an explicit declaration otherwise’ (Alzola, 2015; Enderle, 2015; Müller et al., 2014).

For the most part, Business ethics holds that an action is permissible, required, or wrong if and only if it is an action that a person of good character would (or would not) characteristically perform under the circumstances (Alzola, 2015). Thus, what is right and what is wrong in virtue ethics is defined by reference to people and their traits, which are their basic moral concepts (Alzola, 2015). Leaders, Managers and all employees of businesses are expected to be virtuous people. It is then expected of them to understand these principles and apply them first in setting the missions and goals, then in their execution of the tasks (Alzola, 2015).

INFLUENCE OF ETHICS ON LEADERS AND FOLLOWERS 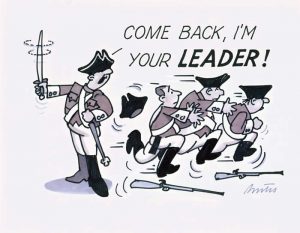 According to Müller et al. Ethical issues in organizations can be placed in seven categories. These categories are;

Ethics scholars are critical of the claim that shareholder-owned corporations should maximize shareholders’ wealth; in general, they call for businesses to aim at serving all their stakeholders, or society as a whole (Moylan & Walker, 2012). The trust that builds between the managers and the governance structure can influence the trust the managers and other stakeholders have in Business and their employees.

An organization’s leadership structure should emphasize a stakeholder orientation. The structure should trust managers to address ethical issues appropriately to increase trust among and between the participants in the organization (Müller et al., 2014). Leaders in organizations involved in the international operation must take note of that fact that those in the driver’s seat who determine the rules of the game risk are ignoring, disregarding, or taking for granted the power imbalances (Enderle, 2015). In the meantime, those affected who could usually feel the impacts may have no say in changing them. It is emphasized that in international operations, corporations should respect the human rights of their stakeholders. Secondly, they should ensure their counterparties or vendors follow the same practice, not too violet human rights. Finally, they should not do business in countries where human rights violation is the norm (Enderle, 2015). These actions will conform to the view that business solves societal challenges to ensure the survival and development of humanity. It also conforms to the view that economic profits are just a milestone and not an end in them. 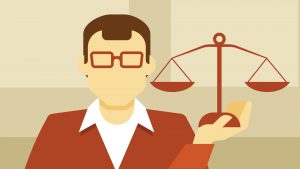 There are four ethical perspectives as reported by Enderle (2014) in dealing with international clients on both a personal and country level (Enderle, 2015).

APPLICATION OF ETHICS IN BUSINESS 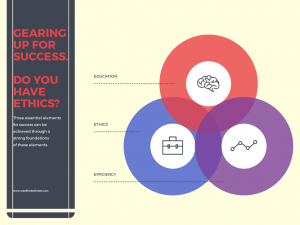 Fairness or justices may be distributive, procedural, and interactional. Customers, employees and stakeholders perception and relationship to corporations depends on their perception of fairness. Corporate leadership can apply the principles of ethics in business to develop the firm’s relationship with all the stakeholders. In as much as we would like to depend on the goodness of people in corporate leadership, we must create duties that we expect of them. We require that everyone be responsible for the outcomes of their actions. Determining intention or motive is challenging, but previous actions or omission may guide in the subjective analysis of intentions. In corporate leadership, the Duties Ethics and the Justices or Consequential theory may lend themselves to measuring, while the virtues ethics and motives may be had to quantify or measure.

Corporate leaders and aspiring leaders should strongly consider the understanding and practice of ethical principles in their day to day operations. People assign value, and to generate value, the people must be taken into account. Sustainable value generation can only be achieved if the stakeholders perceive that there is fairness in the distribution, process and interpersonal relations in the organization.

In light of the above, a behavior or business practices not conforming to approved standards of social or professional behavior should not be tolerated in any organization. Condoning unethical behavior in any organization creates an avenue to promote crime and redundancy. Morals may be relative, but ethics are well understood, some of which may be codified into procedures, taboos, processes, rules, regulations, and laws. In the aspect of change management, it’s imperative to understand why a procedure, process, rule, regulation or law was introduced before removing it; take into account inter-connectivity among stakeholders and outcomes. A classic example is when Christian missionaries went into western Kenya, Africa. They found that it was against the laws of the land for expectant mothers among the Luhya people to eat ripe bananas and eggs. They concluded that the said law was moribund and a way of greedy primitive men denying women the nutrients they needed. They told their converts to ignore it. Incidentally, childbirth deaths skyrocketed among the converts. The missionaries blamed it on witchcraft from the primitive men. In equity, the two sides were both right, from their historical perspectives. In transgression, each one did not learn from the other. There was no stakeholder inter-pollination. The law was in place because the Luhya of old had observed that women have bigger babies when they eat ripe banana and eggs, which had difficulties passing the birth canal (. The solution was to stave the babies slightly then feed both the mother and the baby after birth; it obviously worked because there were people and babies in the region pre-Christianity. The missionaries, on the other hand, thought that the mother and baby need to be fed and kept healthy, they forgot about the small matter of lack of delivery facilities that could offer assistance in case of difficulties at birth, like today’s practice where Medical Science has provided for and adopted a cesarean procedure as a successful delivery aid).

Immortalise this story, commemorate every time you want to apply lessons learnt in different scenarios, consider all the linkages and why your experience may not apply. The practice was ethical, the edict abolishing it may have been seemingly fair and just, but it failed reckon with their ecosystem.