Alternative Dispute resolution is the use of other methods such as mediation, conciliation & Arbitration without resulting to Litigation. ADR typically includes; early neutral evaluation, negotiation, conciliation, mediation, and arbitration. As court queues, rising costs of litigation, and time delays continue to plague litigants, more states have begun experimenting with ADR programs. Some of these programs are voluntary; others are mandatory.

While the two most common forms of ADR are arbitration and mediation, negotiation is almost always attempted first to resolve a dispute. It is the preeminent mode of dispute resolution. Negotiation allows the parties to meet in order to settle a dispute. The main advantage of this form of dispute settlement is that it allows the parties themselves to control the process and the solution. ADR also allows for confidentiality and speed. The essence of ADR is to preserve relationship, turning disputes into business opportunities. The most popular forms of ADR is Mediation & Arbitration.

The concept of Plea Bargain is different, it is considered as a complex tool used in the quick dispositions of criminal trials. 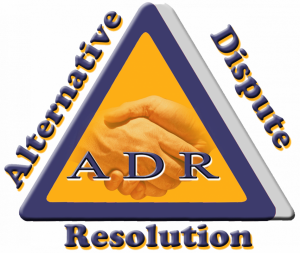 Mediation is an informal alternative to litigation. Mediators are individuals trained in negotiations, which bring opposing parties together and attempt to work out a settlement or agreement that both parties can accept or reject. Mediation is used for a wide gamut of case-types ranging from disputes between investors and their stock brokers, general contracts disputes, marriage disputes etc. Mediation has also become a significant method for resolving juvenile felonies in several parts of the world.

Arbitration is a simplified version of a trial involving limited discovery and simplified rules of evidence. The arbitration is headed and decided by an arbitral panel. To comprise a panel, either both sides agree on one arbitrator, or each side selects one arbitrator and the two arbitrators elect the third. Arbitration hearings usually last between a few days to a week, and the panel only meets for a few hours per day. The panel then deliberates and issues a written decision, or arbitral award. Opinions are not public record. Arbitration has long been used in labour, construction, and securities regulation, but is now gaining popularity in other business disputes. There are, however, numerous state laws on ADR. See Arbitration and Conciliation Act of Nigeria.

A plea Bargain is simply a negotiated agreement or understanding between the prosecutor and an accused, where the accused is given an option to plead guilty to a lesser offence or to one of the multiple charges in exchange for a lesser sentence or  dismissal of the other charges. The Plea Bargain was developed in countries that practise the inquisitorial system such as the United State of America. Plea Bargain has been introduced into the Nigeria Legal system by the Administration of Criminal Justice law of Lagos State and the Economic and Financial Crimes Commission Act 2004 (EFCC Act).

This paper looks to determine the effect of ADR and Plea Bargain on Criminal matters. ADR in criminal Justice system is merely bringing together the accused and the victim together for restitution or compensation. The idea of ADR in a criminal justice system will be to deal with criminal cases (probably restricted to minor criminal offences) without the need to proceed to a trial. Some of these schemes may additionally involve the bringing together of victim and offender in an attempt to “heal” the harm done by criminal activity. Others are aimed at steering juveniles away from crime. Whereas, plea bargain is introduced at the stage of criminal trials, whereby prosecutors and Judges offers the accused concession in exchange for their pleas. This also involves restitution. An example of restitution will be to return looted sum in corruption trial.

However the issue the ADR system may face will be arbitrability of a crime. The general system of law states that a crime is not just committed against a victim but against the state and such crime is subject to public policy. In a case where there has been a murder and the family of the diseased have been financially settled by the victim and the family decides not to prosecute the matter, would that stop the state from going ahead to prosecute the offender? The practicability of Plea bargain is more aligning to the Criminal justice, since the deal will be done between the accused and the state subject to the adjudication of the Judge.

In Nigeria, the courts and legislation have resolved that ADR is only exclusive to civil matters and cannot be applicable to criminal matters. In BJ Exports & Chemical Processing Co v Kaduna Bassey Andah Journal Vol.6 2013 Page 217 Refining and Petrochemical Ltd, (2003, FWLR (pt.165) 445 at 465; 2003, 24 WRN 74), it was held by the Court of Appeal that arbitration and other forms of ADR are so far restrictive to civil matters.

Furthermore, the non applicability of ADR in Nigeria can be seen in the elaborate provision of Section 127 of the Criminal Code where it criminalises the act of concealing a felony for a benefit or property.

However, many scholars have likened ADR to Plea Bargain claiming that even though the ADR has not been accepted as an alternative to criminal trial, it has been firmly rooted in our Judicial System, especially in the case of Plea bargaining. An example is the Administration of Criminal Justice Law of Lagos, where plea bargain has been incorporated into Lagos Judicial system. Plea bargaining has been legislated into the criminal justice system of Lagos State. In my view Plea Bargain does not substantively mean an Alternative dispute Resolution. However, Plea Bargain carries similar features of ADR.

In comparative analysis, an example of Plea Bargain and ADR will be the case of FRN v Cecilia Ibru, (FHC/L/297C/2009) & Amnesty Pardon granted to the Niger Delta Militants. In the case of FRN v Cecilia Ibru,(FHC/L/297C/2009). The accused (Cecilia Ibru) pleaded to a lesser offence after forfeiting several Assets all over the world. In this case the accused was investigated tried and convicted- that was a pure case of a plea bargain. This is in contrast to the Amnesty granted by the Federal Government of Nigeria to the Niger-Delta Militants where the militants were pardoned and restored to the society without trial or conviction. Amnesty or pardon is given to a person or persons who have been tried, convicted and sentenced. But here, we have a case where pardon is granted even before any arrest or trial. This is in my view is ADR.

This paper tries to look at the importance of ADR and Plea Bargain in Nigeria and how they affect our Criminal Justice system. The objective is to keep criminal cases from proceeding to trial or standing long trials, and in the process, save time and money. The attitude of other governments in the world has been quite dissenting. The United States has long accepted plea bargaining & ADR as part of their Judicial system, but with limitations. England has traditionally been hostile to the concept, but is edging towards the American view. Singapore has laid down clear rules to permit and control a system of Criminal Case Resolution. Nigeria has tilted sceptically towards plea bargain but has rejected the general concept and benefit of ADR in her Criminal justice System.

In my view the acceptance of ADR & unrestricted Plea Bargaining in our Criminal Justice System especially without tested guidelines will aid more crimes as prospective offenders would be relaxed with the idea that they can avoid more stringent punishment if they have the resources to bargain an impending punishment. For now Nigeria Criminal Justice system should shy away from applying ADR in her Criminal Justice System until a proper tested guideline is set to accommodate ADR without increasing crime rate. Plea Bargain on the other hand should be applied strictly with regards to fair, just and speedy determination of guilt of any person accused of committing a crime in order to avoid impunity.