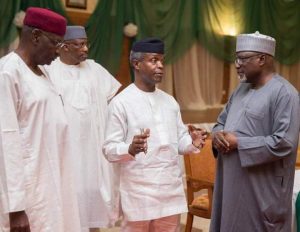 The Nigerian Democracy is perceived threatened by the events  which occurred at the premises of the National Assembly in Abuja on Tuesday 7th day of August, 2018, wherein the said premises was sealed by the Nigerian security forces.
The dishonourable event occassioned by the Nigerian security forces, particularly the men of the Department of State Service, who were facially masked and men of the Nigeria Police Force, prevented Senators and members of the House of Representatives as well as their legislative aids from entering into the National Assembly Complex who came with the hope of attending scheduled meetings and conducting other businesses of the day.
However, in reaction to what appears to be a siege on the National Assembly by security operatives, the Acting President, Yemi Osinbajo, at about 2:00 pm on Tuesday, 7th day of August, 2018, sacked the Director-General of the Department of State Service, Lawal Daura. This was by the Acting President’s spokesman, Laolu Akande, on his Twitter handle, @akandeoj.
He wrote, “AgP Yemi Osinbajo has directed the termination of the appointment of the DG of the DSS, Mr. Lawal Musa Daura. Mr. Daura has been directed to hand over to the most senior officer of the State Security Service until further notice.” 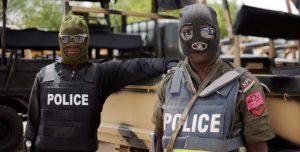 Considering the fact that the DSS and the NPF jointly acted in this event, some Nigerians have called for the dismissal of the Inspector General of Police in other to see justice duly served.
As widely reported on prints and social media platforms, some Nigerians particularly the opposition Peoples Democratic Party, believe this unconstitutional attempt to truncate democracy, was  instigated by the ruling All Progressives Congress. Lawmakers elected on the platform of the ruling All Progressives Congress had dissociated themselves from the security operatives’ actions.

In a Statement by  the Nigerian Bar Association, “the Nigerian Bar Association condemns in the strongest terms the attempts by the government or indeed any faction of the political class to drag the Nigerian Security Forces into their ongoing political bickering and maneuvers totally unrelated to their responsibilities of governance for which they were elected…” They urged the Nigerian security agencies to resist engaging in any unconstitutional operations or allow themselves to be dragged into partisan political activities directly or indirectly.
The Nigerian democracy must be defended and it is the duty of every citizen of Nigeria to defend it.