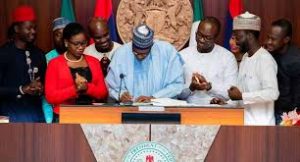 On the 31st of May, 2018, President Muhammadu Buhari in fulfilment of the pledge where he stated thus, “In few days to come, I will be joined by many promising young Nigerians to sign into law the “Not Too Young to Run” Bill”, during his May 29 address to the nation to commemorate Democracy Day during which he pledged to give assent to the bill in a matter of days, signed into law, the ‘Not-too-young-run Bill’. The President’s assent to the Bill has heralded a new dawn in Democratic reforms in Nigeria.
His Excellency, President Muhammadu Buhari identifies the Not-too-young-to-run Bill as a landmark piece of legislation that was conceived, defended and effected by Nigerian youths (Nigerian Youths are not lazy after all). He added that the coordinators of the Not-too-young-to-run movement had now established a formidable legacy – which is that “in our maturing democracy, if you really want to change something in Nigeria, and if you can organise yourselves and work hard towards it, you can achieve it.

CHANGES AND INNOVATIONS UNDER THE NEW AMENDED LAW
A perfunctory look at the new Law and its predecessor reveals a significant change to the grundnorm in Nigeria which is expected to advance Democracy and creating a platform for vibrant young minds in the Nation to take up mantle of leadership.
As intended, the new Law amends certain provisions of the 1999 CFRN to reduce the age limits for eligibility for certain elective offices in Nigeria.     Read More